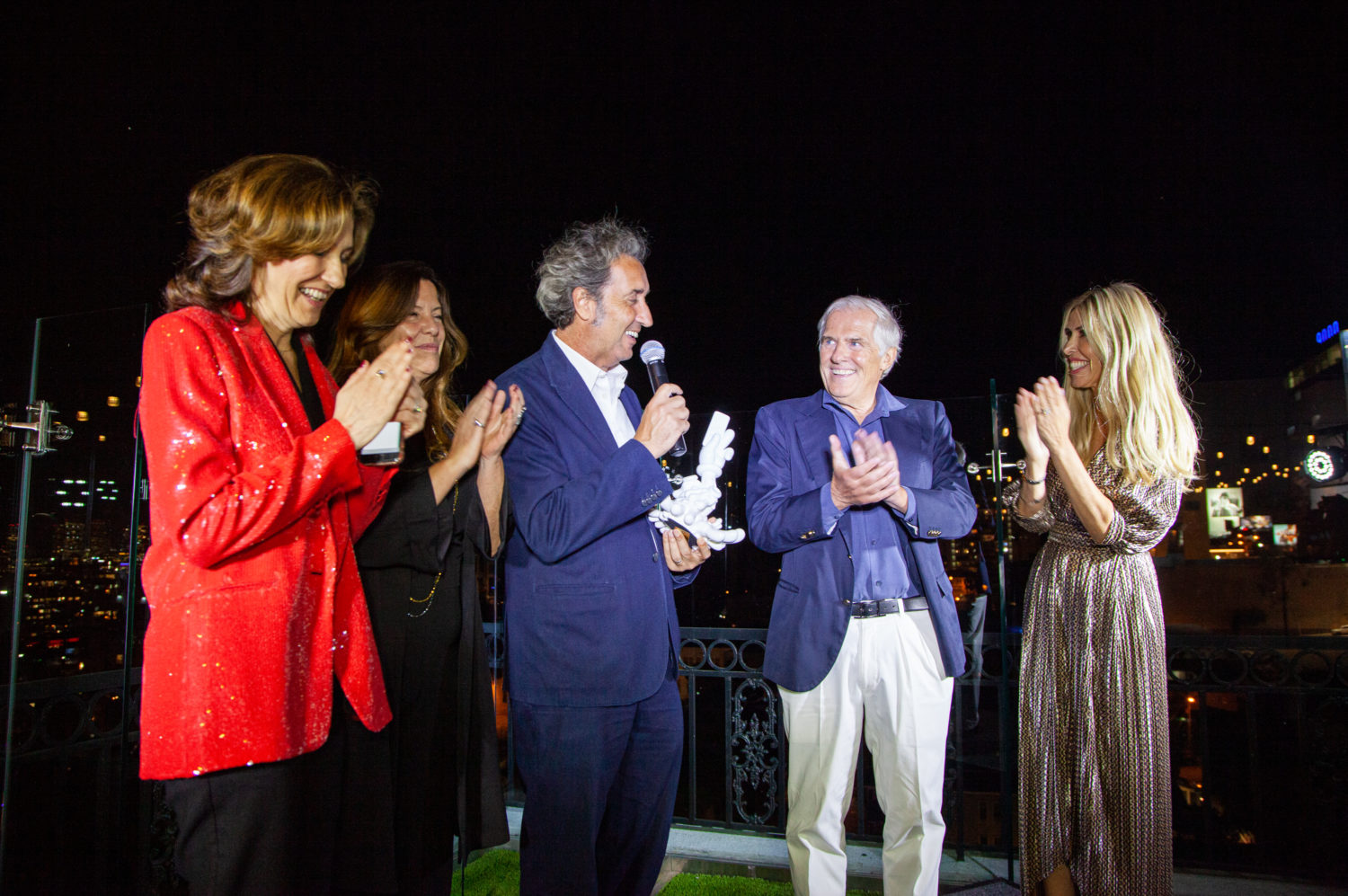 “I am not good at public speaking in front of groups, BUT I am good at receiving awards and displaying them well at home and this one I will show off near my Oscar!”

… with a good dose of humor special honoree Paolo Sorrentino accepted the first ever ITTV Award at the inaugural launch of ITTV, the Italian TV Festival, last week in Los Angeles, on The London Hotel Rooftop. The award winning Italian director brought to the festival audience members a US sneak peak of the trailer for his newest show, The New Pope. Calling it “My Vatican”, Sorrentino brings his portrait of Lenny Belardo on the heels of the enormous international success of The Young Pope.After being given the award by Marco Testa, Sorrentino lingered to speak about the importance of television and it’s language as an artistic and communication platform, defining the ITTV Festival as “a necessary event, today”.

Among the guests of honor was Jared Harris, Emmy nominated lead actor for his work in the acclaimed TV series Chernobyl, awarded with the Emmy for best mini-series last Sunday. During the ITTV evening, the English actor spoke of the importance of independent projects, like the short Outsideby Loris Lay which showed at the festival and featured Jared who noted:  “there are interesting stories with incredible actors who only need a “moment” of exposure to make a difference, and events like this festival create that opportunity.”

Earlier in the afternoon, participants had the opportunity to hear from an illustrious creative panel at the SoHo House, which included Director Peter Landsman,  Martha De Laurentiis, president of The De Laurentiis Company, Nils Hartmann, Original Product Director for  Sky Italy and  Elaine Low, Variety Senior TV journalist. “TV today is no longer represented by only the American and British standards…” said Peter Landsman, who will direct soon a new tv series about Italian prosecutor Alessandra Cerreti.  Landsman continued: “Series like Gomorrah represents the avante garde of new television, which has an increasingly international flavor”. Landsman even made an interesting suggestion to international talent: “within 10 months America will see a large writers strike and I suggest all young Italian and international writers step up!”

“The presence today at the ITTV of Italy’s leading content producers RAI and Sky, who are showing their trailers and teasers to the US audience for the first time, confirms that the innovative approach of the festival (we created) is appreciated. In an increasingly competitive global market, Italian TV series, documentaries, shorts, web series and more have achieved internationally recognized creative and quality levels and our ITTV festival helps to promote that”, emphasized Good Girls Planet CEO and festival co-founder Valentina Martelli.

The festival was also made possible by Marco Testa, President of the Communications Group Armando Testa who added  “I am an emotions catcher and I want to help Italian talent reach the world. Emotions are the language with which Italians story-tell and which Americans want”.

“Future editions of the festival are intended to add a showcase of young Italian talent: actors and actresses, writers and directors who can bring creative spark and ideas to the American and international marketplace”added the other Good Girls Planet co-founders Francesca Scorcucchi and Cristina Scognamillo.  “We want to offer emerging talent networking opportunities with important decision makers, outside Italy.  All of this of course in addition to offering a platform to showcase Italy as an important and beloved film location.”

The ITTV awards are created specially for the festival by Italian Artist Fidia Falaschetti.

The festival is sponsored by the Italian Consul General of Los Angeles and the Italian Trade Agency with additional support from the  Italy-America Chamber of Commerce West, True Italian Taste, Di Saronno and Setteanime Winery.